“It was our goal to create as many exciting opportunities for play and movement as possible,” says Fritz-Ulrich Axt, responsible for playgrounds at Monheim District Council. “Some people might recall these from the old Tarzan films, but, bearing safety in mind, it was done in such a way as to prevent too many trees and bushes being uprooted in the process.”

Just like Tarzan, children can now climb up into the heights through various types of climbing and balancing apparatus, a suspension bridge and two tree houses, thereby discovering the seemingly dangerous jungle world. 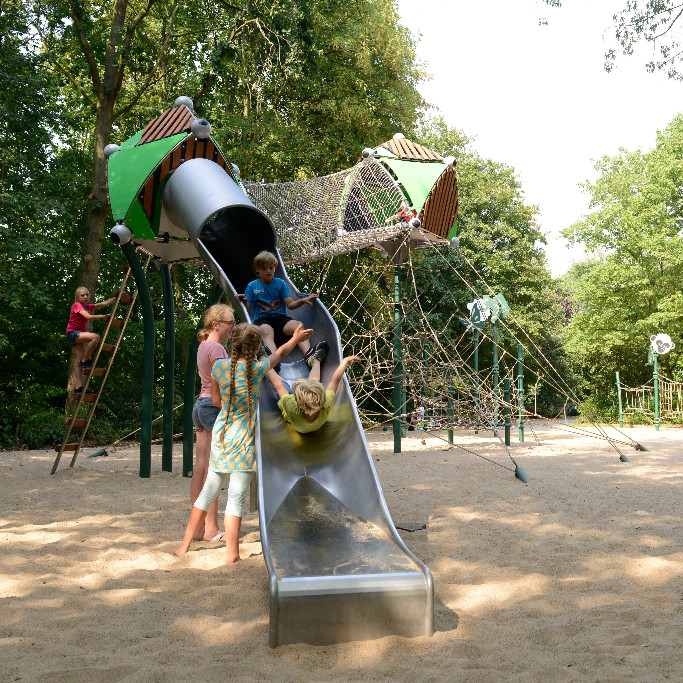 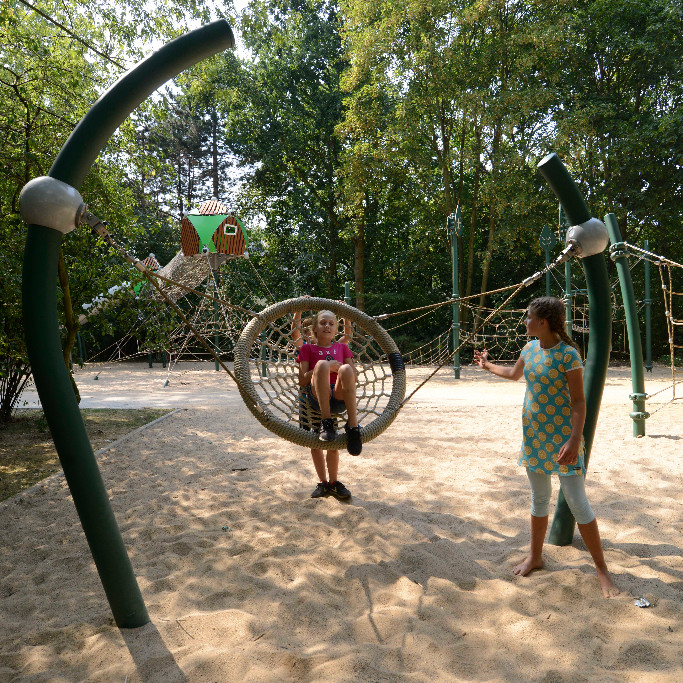 The new playground’s biggest draw is a combined play structure from Berliner’s Greenville product line. The central mast play structure’s spatial net, held firmly in place by a five-way tensioning system, enables children to climb up into tree house Boo, which is attached to the central mast play structure about 15 feet off the ground. A net tunnel leads directly to tree house Trii. Here, children can relax and catch their breath in a safe den before speeding back down to earth via a stainless steel, open slide. 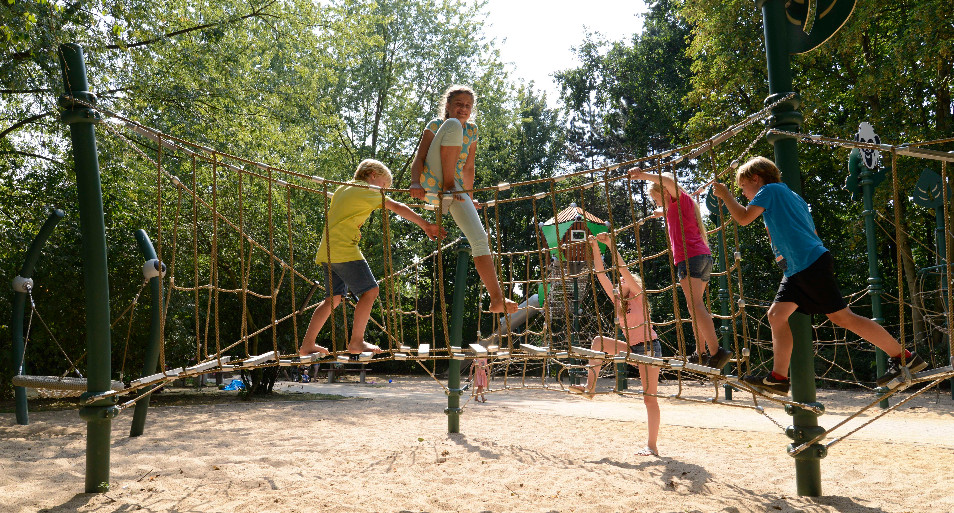 Once on the ground, having tackled various elements of the low-level rope course in the rope jungle, children can climb into the wasps’ nest. This ball-like net is manufactured from a special tensile rope, which ensures that it maintains its round shape even if weighed down with a heavy load. The low-level rope course continues on the other side of the footpath, where further challenges await, such as a swaying bridge and a wobbling walkway that intersects it, not to mention a climbing net incorporating a step-through hole. 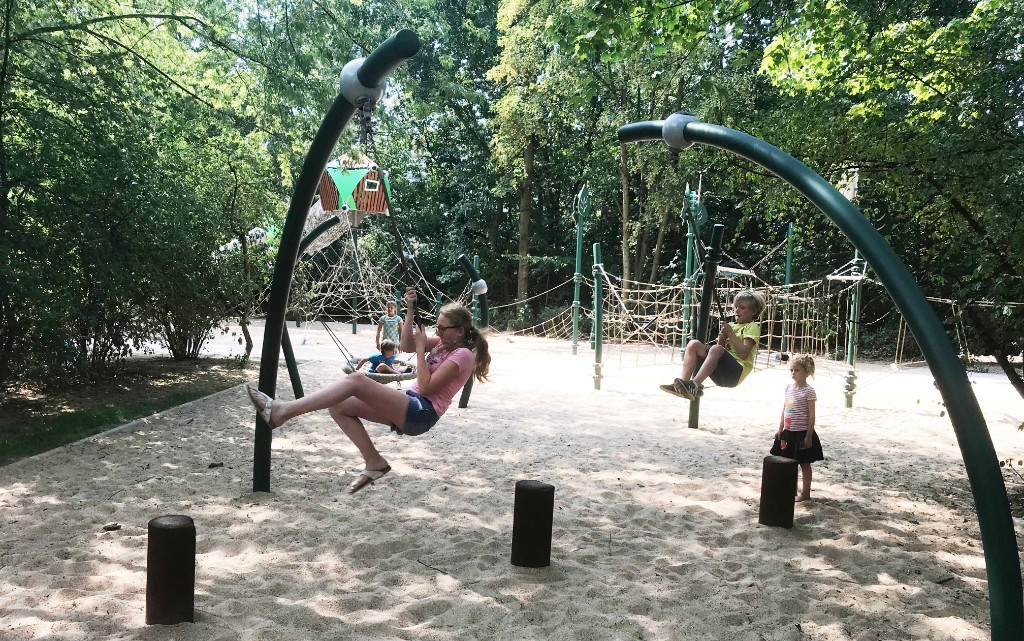 The two Lianas, in the form of two swinging ropes dangling from curved posts, are an absolute innovation. The goal is to use the lianas to swing your way from stump to stump without falling into the sand below. This offers an enticing challenge for older children in particular. 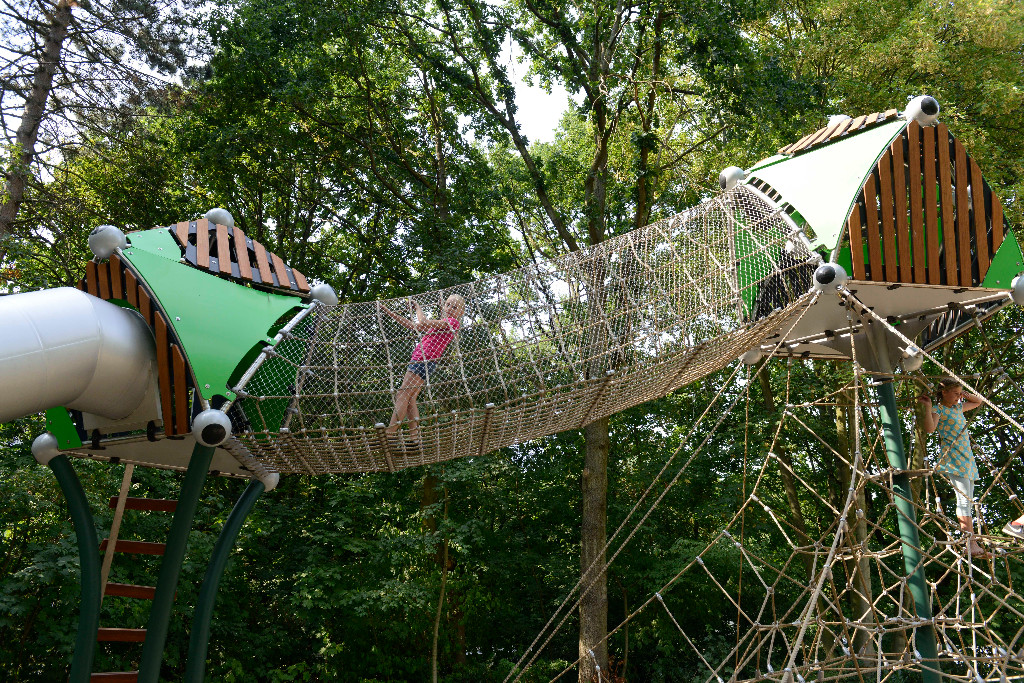 Although wood might be the most obvious building material springing to mind at the mention of the theme “jungle,” in the case of Monheim’s jungle playground, a conscious decision was taken to use other materials. Steel was employed in combination with rope and bamboo, ensuring an increased life span for the equipment, since this prevents the wood’s inevitable turning green over time. “I didn’t want a green layer to start forming on the wooden timbers after a short time,” explained Mr Axt, “since this quickly develops into the early stages of wood rot.” 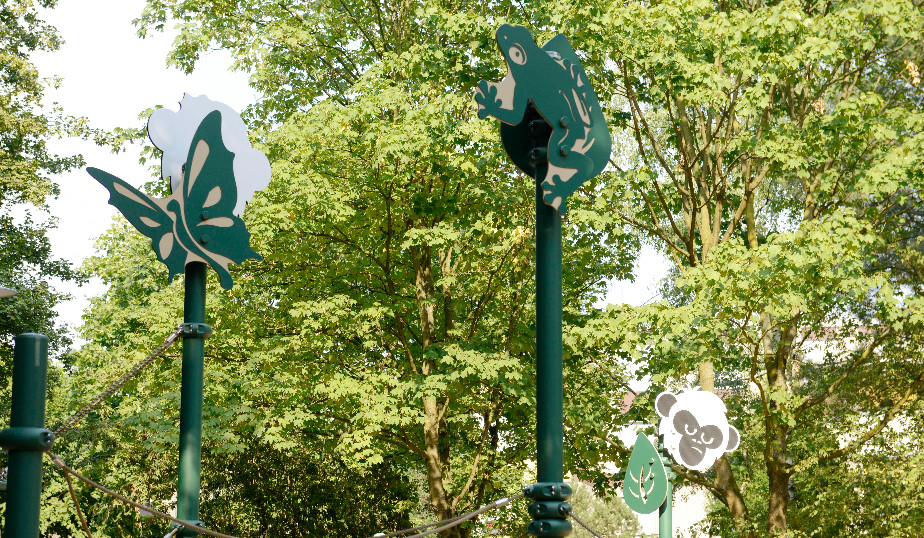 Remaining true to the jungle theme, the curved steel posts were painted green, and were decorated with theme-specific cut-outs, such as palm leaves, a monkey face and a frog, to name but a few. Thanks to the highly accurate CNC machinery used at Berliner Seilfabrik, any motif can be cut to order. This allows for the creation of playgrounds with highly specific themes.

The remainder of the play structure’s components were also produced in natural colors. In particular, the bamboo panels covering the playhouses complement the jungle theme. 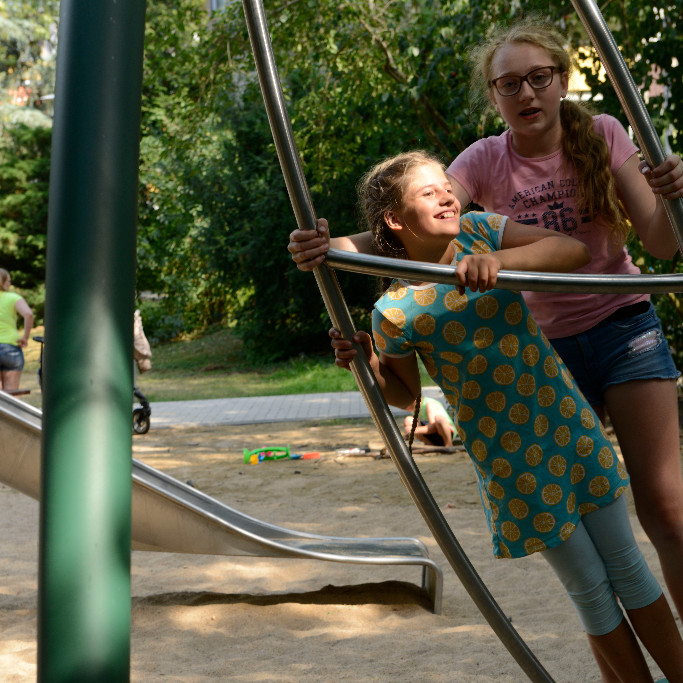 The new playground has been rounded off with two moving elements from Berliner’s URBAN DESIGN product line, the Monkey Jibe and a nest-swing known as the Bowl Swing.

At the inauguration ceremony, it was clear that the new jungle playground was already a hit with the children. Feedback from local residents was that the playground offered challenges for older and younger children alike. Not only that: despite its ostensible “jungle” theme, the playground’s design and execution is sufficiently low-key that children feel free to exercise their fantasy and come up with play ideas of their own.